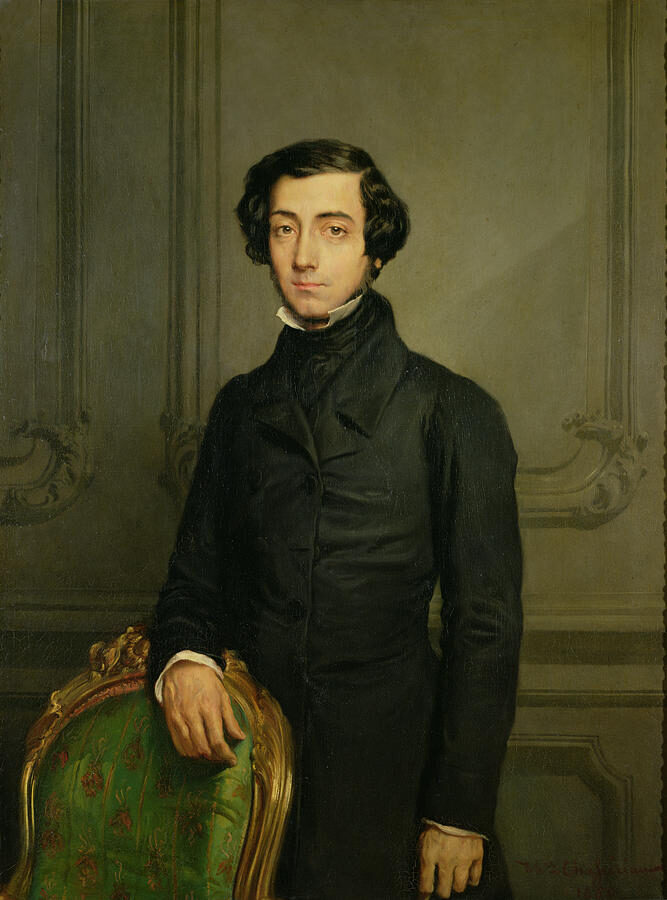 Andrew *Jackson emerged from the rough-and-tumble freedom of the American frontier to rescue the American cause in the War of *1812. His election to the Presidency in 1829 inaugurated the era of “Jacksonian *Democracy”, the effects of which were felt right up the Civil War. Alexis de Tocqueville visited the United States in the very heart of Jackson’s Presidency and wrote his famous commentary on Democracy in America in 1831. Tocqueville lauded the salutatory effects of a *free enterprise economy on individual initiative and national productivity. At the same time, he warned of the tendency for a dominant spirit of *individualism to stifle genuine *social concern, thus inviting an era of *paternalistic big-government. “America is great because America is *good,” said Tocqueville and she will remain great only as long as the spirit of genuine *Christianity occupies the heart of her affections. Unfortunately, America ignored Tocqueville’s perceptive warning and now retains only the *shell of her former greatness.

Historical context. Although a majority of Americans continued theologically orthodox in the early years of the 19th century, the older Puritanism had been debased by Arminianism in the 2nd Great Awakening. This was a variation which exalted the free will of man above the sovereignty of God. It was carried West primarily by the Methodists and Baptists, and increasingly by the Presbyterians themselves. Among the unbelieving radicals, 18th century Deism had been replaced by Unitarianism in New England, which would itself yield to transcendentalism. The latter was popularized by Pantheists like Henry David Thoreau and Ralph Waldo Emerson. Their writing was heavily laced with the thought of German literary icons, Hegel and Goethe. These religious currents were congenial to and mixed easily with political themes of Jacksonian Democracy to create an era of volatility leading up to the Civil War.

Andrew Jackson, the hero of the War of 1812, became the seventh President of the United States in 1829 (1829-1837). Jackson arose from the common people and was perceived to be the President of the “Common Man.” However, he opposed state nullification of federal laws and supported the infamous “Tariff of Abominations” of 1828 which placed stiff import duties on both raw materials and goods. On the other hand, he opposed unconstitutional expenditures for internal improvements, he fought and defeated the 2nd Bank of the United States, and he was the only President to ever pay off the national debt. Jackson appointed six members of the Supreme Court, including Chief Justice Taney.  They were all Southern sympathizers who dominated the court right up to the Civil War.

Thus, Jackson opposed two of the three key components of Henry Clay’s American System: 1) corporate welfare, the 2) the National Bank.  He supported the third — the protective tariff — but apparently used it to pay off the national debt.  As a railroad lawyer, Abraham Lincoln labored tirelessly for the American System for 28 years of public life up until his election to the Presidency in 1861.  The American System was in reality the old British mercantile system that sparked the American Revolution and was soon to ignite the War of Northern Aggression.  As Patrick Henry had prophesied — “This government cannot last,” he thundered, “It will not last a century. We can only get rid of its oppression by a most violent and bloody struggle.”

Alexis de Tocqueville visited America in 1831, at the very dawn of the era of Jacksonian Democracy. He had an official commission from the French government to study the American criminal justice system, but his personal objective extended much further. Tocqueville sought to make an in-depth sociological study of American society – her people and institutions. “I sought there,” he said, “the image of democracy itself, with its inclinations, its character, its prejudices, and its passions, in order to learn what we have to fear or to hope from its progress” (1). His observations and conclusions were informative not only for Europeans, but held up a mirror of self-examination for Americans themselves. That image was not altogether complimentary.

Summary of Tocqueville’s teaching. Tocqueville marveled at the power and productivity that freedom gave to America. “Here freedom is unrestrained, and subsists by being useful to everyone without injuring anybody. There is something undeniably feverish in the activity it imparts to industry and to the human spirit.” He also noted the respect for family stability produced by the religious aspect of the country: “There is certainly no country in the world where the tie of marriage is more respected than in America or where conjugal happiness is more highly or worthily appreciated.”

At the time Tocqueville wrote, localism was still dominant in America, with each local community conducting its own affairs in relative isolation from higher levels of government. Instead of looking to Washington to meet every need, Tocqueville noted the proclivity of the Americans to form private associations for that purpose. In pursuing their own “self-interest, rightly understood”, Americans were prompted to meet the needs of their neighbors and render appropriate service to the state. However, he was concerned that the spirit of American individualism would eventually suppress the social impulse and thus invite paternalistic big government to assume these roles.

Although he probably did not fully understand its source, Tocqueville also put his finger on the fatal flaw in the American system, its substitution of majority rule for the law of God as the authority in civil government. There is a fatal tendency in a Democracy for the majority, motivated by greed, to trample on the rights and property of a minority. And this in the midst of a people who were arguably among the most genuinely Christian on the planet.

The locus of authority in “we the people” created a leveling effect which Tocqueville detected in a greater love of equality than of freedom. This spirit lay at the heart of Jacksonian democracy and Tocqueville found it ominous. This despite the fact that nearly every free man owned property and understood the principles on which it was maintained. Tocqueville predicted that the democratic spirit would produce a radical individualism, that would eventually leave the individual naked before the raw power of the state. “Thus not only does democracy make every man forget his ancestors, but it hides his descendants, and separates his contemporaries, from him; it throws him back forever upon himself alone, and threatens in the end to confine him within the solitude of his own heart” (2).

Implications for subsequent history. Nor did the hypocrisy underlying the issue of slavery in America escape Tocqueville’s discerning eye. “…the prejudice of the race appears to be stronger in the states which have abolished slavery, than in those where it still exists; and nowhere is it so intolerant as in those states where servitude has never been known. Not only is slavery prohibited in Ohio, but no free Negroes are allowed to enter the territory of that state, or to hold property in it” (3). It was this spirit of intolerance and hypocrisy in the North that insisted on war rather than peaceful resolution of conflict, within a generation of Tocqueville’s visit.

Biblical analysis. A quote often attributed to Tocqueville summarizes well the tragedy of the American experience: “I sought for the greatness and genius of America in her commodious harbors and her ample rivers, and it was not there; in her fertile fields and boundless prairies, and it was not there; in her rich mines and her vast world commerce, and it was not there. Not until I went to the churches of America and heard her pulpits aflame with righteousness did I understand the secret of her genius and power. America is great because she is good and if America ever ceases to be good, America will cease to be great.”

This comports well with the Scripture at Proverbs 16:12 – “It is an abomination to kings to commit wickedness: for the throne is established by righteousness.” And again at Isaiah 42:25 – “Who gave Jacob for a spoil, and Israel to the robbers? Did not the Lord, he against whom we have sinned? For they would not walk in his ways, neither were they obedient unto his law.”

Corrective or Prescriptive Actions: It was departure from God that brought America to her current desperate plight and it is only in return to God that she may be rescued. “At what instant I shall speak concerning a nation, and concerning a kingdom, to pluck up, and to pull down, and to destroy it; if that nation, against whom I have pronounced, turn from their evil, I will repent of the evil that I thought to do unto them” (Jer. 18:7,8).