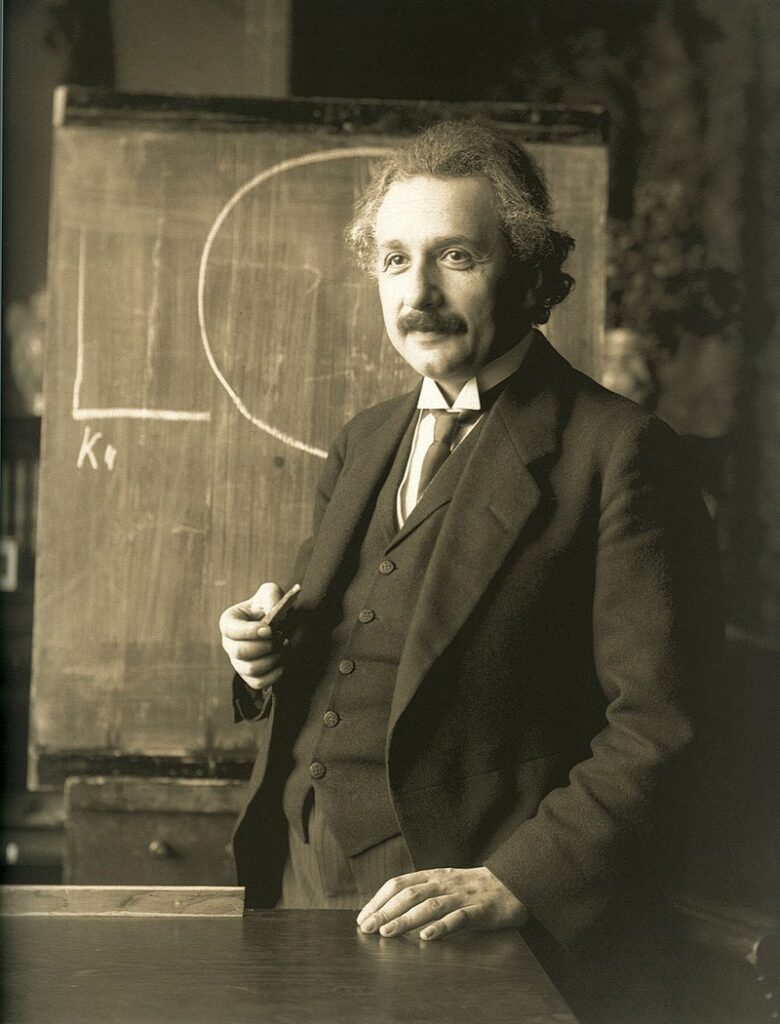 Einstein’s *special theory of relativity holds that the speed of light is constant in a vacuum regardless of whether the observer is at rest or in *motion at a constant speed. Thus, Einstein corroborates the *objectivity and constancy of truth. On the other hand, Einstein’s general theory led him to the conclusion that *time is variable depending on speed and that space is *curved in the vicinity of a large body of matter. He also surmised from this that the universe is *expanding, which would account for gravity, since gravity and *acceleration are equivalent. Unfortunately, this has led unbelievers to enlist the theory of relativity in support of the idea that truth is *relative in every realm, including physics. Thus, Newton’s concept of a mechanistic universe governed by natural law has yielded to a universe in which reality is defined by the observer and his *instruments. For example, no tree can fall in the forest unless someone is there to observe it. This, of course, is nonsense because we know that according to Genesis Chapter One, God defined reality before the mind of man was ever invented. Einstein protested these abuses of his theories by *quantum physicists, but was himself governed by natural law rather than biblical law.

Who was Albert Einstein? (1879-1959) Albert Einstein was a German physicist whose formulation of theoretical laws of relativity in 1905 revolutionized the science of physics in the 20th Century.

Historical context. In 1905 Einstein received his doctorate degree from the University of Zurich and published three theoretical papers that laid the foundation for subsequent development of physics in the 20th Century. The years 1915 to 1930 witnessed the development of quantum theory in the field of physics, with concomitant challenges to the concepts of measurement and causality. Einstein resisted these applications of his theories.

Einstein rose to world prominence after World War I and was awarded the Nobel Prize for Physics in 1921. He capitalized on his fame by promoting the causes of pacifism and Zionism. When Hitler came to power, Einstein wisely choose to flee to the United States, where he modified his pacifism. He collaborated in the drafting of a letter to President Roosevelt, urging development of an atomic bomb given the likelihood that Hitler was seeking to develop such a weapon himself.

After World War II Einstein again took up the cause of disarmament and world government and of Zionism. His efforts were rewarded by creation of the United Nations in 1945 and the modern nation of Israel in 1948. Although he continued to promote Zionism, he refused an invitation of the newly formed nation of Israel to become its first President.

Summary of Einstein’s teaching. We will here attempt a non-technical summary of the special and general laws of relativity. It has been observed that at the time Einstein advanced his theories very few of his scientific colleagues accepted them and that probably less than 10 people in the entire world even understood them. Einstein engaged in “mind experiments” based on mathematical equations and a minimum of postulates (Occam’s razor), which made his theories difficult to understand. If this is true of the trained scientist, it is certainly true of the untrained, or minimally trained, layman. To avoid frustration, the student must accept the fact that omitting the mathematical details will necessarily leave certain logical gaps in the explanation, which most laymen must accept “by faith.”

In 1905 as a newly minted graduate student Einstein presented three revolutionary papers. The third of these described the Special Theory of Relativity, which stated in part that the speed of light in a vacuum is universally constant. A second postulate was the theory of relativity in which physical laws are the same regardless of the relative position of an observer –whether he is at rest or in motion at a constant speed.

Because Einstein was committed philosophically to the idea of an orderly universe he attempted to expand his theory to encompass all of created reality – a unified field theory. The next step in that process was his General Theory of Relativity in which he theorized that gravity is equivalent to acceleration. A well-known illustration is the observation that people in an elevator cannot distinguish between the forces of gravity and acceleration that are acting upon them. From this Einstein deduced that gravity is the interaction of bodies in four-dimensional space-time, which includes the three dimensions of Euclidian geometry, plus time. He then predicted that time is variable depending on the speed of travel or location in the universe and that starlight and thus space are curved in the vicinity of a large body of matter, such as the sun.

Based on his General Theory, Einstein surmised that the universe was expanding, which would account for the force of gravity/acceleration, but he could not accept the philosophical implications of his conclusion and inserted a “correction factor.” However, shortly thereafter, astronomer Edward Hubble confirmed Einstein’s unfudged theory by direct observation.. This led to the Big Bang theory, which from one perspective confirms the Christian doctrine that the universe had a beginning. On the other hand, it has also been used to promote the Hindu idea of a cyclical universe in which all the matter in the universe expands, then collapses to a point, then expands again in endless cycles.

Implications for subsequent history. Einstein’s work proves that time is not absolute, but is a created entity and can transpire faster or slower depending on the gravitational field. Thus, time is not the great unchanging absolute.

Against Einstein’s vociferous protests his theory was used to justify a relativistic approach to virtually every academic discipline, including physics itself. Under the influence of Kant, quantum physics has developed along the lines that reality is defined by and does not exist independently of, the measurement process itself. For example, many physicists now believe that reality is created by observation, that consciousness creates reality or even that there are many parallel universes (1). Kant had earlier stated on the philosophical level what Einstein seemed to confirm on the scientific level, namely that reality is in the eye of the beholder. According to Kant, the mind of man possesses interpretive categories that define and give meaning to the whole of external reality. Truth therefore, is relative to each individual and man becomes his own god.

Einstein clung to the older Newtonian view of an orderly universe governed by orderly rules. Newton’s mechanical laws of physics were developed in the context of the Christian view of an orderly universe even though Newton himself was not strictly orthodox. In fact, Newton’s discoveries had contributed to a theory of natural law that seemed to confirm the idea that universal principles of truth were attainable apart from special Revelation. With Darwin and Einstein, the next logical step for the unbelieving scientist, was to dismiss natural law altogether with its corollary theory of a “watchmaker god.” Unbelieving scientists were now able to dispense with God altogether and “the man in the street” followed blindly.

In the face of these developments the Jewish-born Einstein protested, “I cannot believe that God plays dice with the universe.” In spite of his protests and his commitment to social causes, he nonetheless viewed science as the ultimate source of truth. “Only the discovery of the nature of the universe,” he said, “would have lasting meaning (2).”

Corrective or Prescriptive Actions: The appeal to scientific natural law as an approach to apologetics is generally ineffective in the context of a culture permeated with the idea of relativity. If we present scientific evidence to the unbeliever, we must take care not to place him in the role of an autonomous judge of what is or is not true. Rather, the evidence should be used to add to the unbeliever’s burden of guilt and culpability in order that he might appeal for mercy to the judge. Thou shalt not put the Lord thy God to the test.