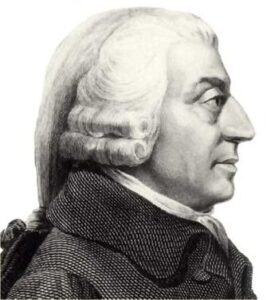 Adam Smith wrote Wealth of Nations to counter the British policy of mercantilism toward the American colonies. He believed that a market free of government rules would create the most overall prosperity, as if by an invisible hand. Men must serve the highest interest of their cust- omers in pursuing their own interest. Smith did not write from a Bible base so both capitalists and Marxists have used his ideas.

Who was Adam Smith?  Adam Smith (1723-1790) was a Scottish philosopher and economist.  He is known as The Father of Classical Economics.  Smith taught for many years at the University of Glasgow.  During a 10-year sabbatical he wrote An Inquiry into the Nature and Causes of the Wealth of Nations (1776).  Smith was forgetful and at times this could be embarrassing.  One Sunday he rose from bed without dressing and went into his garden to meditate.  He became so lost in thought that he totally forgot himself. He proceeded to  walk twelve miles into Dunfermline absorbed in economic contemplation.  The tolling of the church bells finally roused him.  Only then did he realize he was clad only in nightgown  much to the amusement of the congregation.  This utter self-forgetfulness may have nurtured Smith’s devotion to economic liberty. “It is the highest impertinence and presumption, therefore, in kings and ministers to pretend to watch over the economy of private people, and to restrain their expense,” he noted, since “…they are themselves always, and without any exception, the greatest spendthrifts in the society….”

Historical context. Smith lived and wrote during the heyday of the Scottish, “Right-wing Enlightenment.”  This was the “common sense” response to radicals like Voltaire, Kant and Hume.  Smith was a friend of Hume and influenced in part by his empiricism and economics.  But, the schools of philosophy to which they adhered were at odds. Smith also argued against prevailing mercantile policies of government intrusion in the market.  This included things like tariffs, taxation, and not letting colonies have any other trade partners.

Summary of Adam Smith’s teaching. The first principle in Smith’s system of political economy is laissez-faire.  This is a French term for the free exchange of goods without government roadblocks.  The basic ways by which wealth is transferred are rent, wages, and profits.   In a free market each person acting in their own best interest promotes the welfare of others at the same time.   A so-called “invisible hand” directs the action toward the highest good.  So Smith was not promoting “cutthroat capitalism” or an untamed “virtue of selfishness.”  He believed that each producer has to do one thing to avoid being forced out of the market.  He has to serve the highest interests of his customers at the best price.

Implications for subsequent history. Wealth of Nations appeared on the eve of the American Revolution.  It was an important thread in the tapestry of ideas forming the backdrop of the U.S. Constitution. In spite of his friendship with Hume, Smith was a key player in the right-wing Enlightenment.  The latter was infused with the Scottish Common Sense Rationalism that secularized the thinking of the American framers. As noted elsewhere, Scottish Realism was brought to America (most ironically) by Reformed Presbyterian Pastor John Witherspoon.  Smith’s free trade tenets were part of the motive behind Madison’s drive for political centralization.   He wanted to get rid of tariffs among the colonies.

His Wealth of Nations became the basis of modern economic thought.  Governor Pownal called it “the Principia of the social sciences.”

He gave birth to the idea of limited government intrusion in the market   This, of course,  is the antithesis of Marxism.

Biblical analysis. Free actions are not always sinless actions.  Thus, the “invisible hand” does not automatically ensure that good will result.  It is the folly of conservatism to assume that autonomous man acting as an individual is more virtuous than man acting as a collective. The free enterprise system does the better job of checking and channeling man’s self-interest.  But, it too must be governed by biblical law.  Nonetheless, biblical economic law assumes a free market.  In Jesus parable of the laborers, the householder asked rhetorically, “Is it not lawful for me to do what I will with mine own?” (Matt. 20:15).

Corrective or Prescriptive Actions:  We have seen some contradictions in Adam Smith.  This is because his theories came from an empirical and natural law perspective.  He was not writing from a strong base in the Bible.  Apart from biblical law, the free market may in fact be abused to the neglect of the poor.   For instance, in Book IV, Chapter VIII, Smith declared that “Consumption is the sole end of production….”  This runs counter to the Bible’s focus on thrift, stewardship and inheritance.  Landowners are required by God “to not wholly reap the corners of thy field…thou shalt leave them for the poor and stranger….” (Lev 19:9, 10).  However, this does not appear to be a civil law with a penalty attached.  Boaz, a central character in the book of Ruth, provides a concrete example of this principle in ancient Israel.